The Internet turns 35 today. I have the fortunate position of being the youngest speaker to present at the Birthday Party. I spoke about what it meant to grown up with the Internet being a given and what it is that youth are doing with the tool today.

It’s amazing to sit in a room full of people who completely revolutionized my life and those of my peers and of the generations to come. Being here has reminded me of how much we have taken this technology for granted. The stories have been beautiful, full of the chaotic process of creation, including crashes.

Apparently, anniesj wrote an anti-Bush post on her LJ. Someone else on LJ reported this to the FBI and the nice Secret Service people showed up at her door. While they didn’t arrest her, she now has a record. She documents the full situation on her LJ.

People often ask me why i’m opposed to sousveillance. I believe that giving everyone the right to surveillance will not challenge those in power who have such ability. I believe that it will legitimize them. Furthermore, i believe that people will use the power of surveillance to maintain the status quo. Worse, i believe that it will be used to create more hate, distrust and fear. Sousveillance in the hands of the masses will not be used to challenge authority because most people believe in the legitimacy of that authority, whether it be corporations or the government. Furthermore, they believe they should fear when those authorities tell them that they should fear everyone. Even when they are not told, when the media consistently reports on all the terrible things that individual Islamic people do, they believe that they should fear all Islamic people. Fuck Brin. A transparent society would mean complete marginalization of already oppressed peoples in this country.

After work, i stopped by to see a friend. We talked at length about research and she told me that i needed to track down a NYTimes Magazine article from about two years ago that discusses the Pro-Ana community. She thought i’d find that report fascinating.

I went home, poured some OJ and picked up the magazine on the top of the magazine stack to read some non-theory before going to bed. On the top of the stack was a NYTimes Magazine with a discussion of the architectural replacements for the WTC site. I groaned since this was one of the topics in my theory reader that i was avoiding. I noted it that it was an older Magazine, thought it odd to be on the top of our stack, put it down and went to bed.

My roommate woke me this morning when the cable modem guys came. He said that it was really strange that there was an old NYTimes Magazine in the kitchen. I told him i’d seen in too. I poured some cereal and picked up the same Magazine, avoiding the cover story. The first page i turned to after the cover story was the Pro-Ana story.

Liz revisited my Walmart/Starbucks Nation piece. In doing so, she reminded me that this piece failed to make its point. So i thought that i’d retry.

1. Both rural areas and cities have brands that they ascribe to; these are very different brands. There is a bi-directional disdain for the brands of the other group. Certainly, the brands bleed into both regions, but those brands tend to resemble certain class/regional expectations. Yes, i can get to a Walmart somewhere in the Bay Area, but i see a Starbucks on every corner. I’m always humored when my city friends go home to their parents and bitch because they can’t find a Starbucks. These are the same people (self included) who groan at the ever-present obviousness of Walmart.

2. Consistency of brands allows for easy mobility between regions. At this point, suburbia in most regions resembles the suburbia in other regions, provided that we’re talking about the same socio-economic level. Cities start to bleed together (and god knows airports do). What keeps most of this consistent has to do with brands. No matter where you go, you can find the Walmart/Starbucks of your choice. This provides for security in the shifting.

3. The tendency of city people is to critique the brands in the rural areas AND vice versa. There is a great article in my reader from a Kansas paper bitching about those Starbucks people. What i was trying to do was expose my own bias while realizing that there are branding wars on both sides. I have immediate disdain over Walmart, thinking that i have choice, but realizing that i live in a culture that moves from Starbucks to Safeway.

3. Historically, the image of the rural area was precisely what Liz is getting at – beautiful houses, streets with sidewalks, community. For most of the country, i don’t think this is as true as it was 20 years ago, mostly because of the consumption culture that is present. It certainly isn’t true where i grew up. When you don’t go to the corner store, you don’t talk to everyone in that small geographic region. When you go to the Safeways, you do your shopping without a community (unless we’re talking the Castro Safeway). Big corporate shopping institutions become very de-personalized, very anti-community in all regions. There’s often talk about how people in cities don’t know their neighbors; it saddens me that this is spreading.

4. My concern over consumption culture is connected to my concern over this election. There is a divide in this country and it falls along city/rural lines (with the suburbs trapped in the middle). When i’m visiting Walmart Nation, i’m visiting predominantly red nation. When i’m in Starbucks Nation, i’m visiting predominantly blue nation. It’s unbelievable because it is both a class and regional division that has resulted in entirely different lifestyles. It’s even more painful because historically the rural areas were as Democratic as it gets; today they side with the wealthiest Americans under the pretense that they have the same values.

More than anything though, the moral division in this country is branded on all sides. We have companies that cater to each of our values. They’ve figured out how to identify with us so that we’ll identify with them. Rural America used to pride itself on mom & pop everything, but that’s no longer the case.

My post was not supposed to be a judgment against rural/suburban culture. It was intended as an exposure of my own biases as i evened the playing field in conversation. I life in a “lifestyle consumption” culture which is just as despicable as a “bargain shopping” culture – they both play into the desires of corporate consumptions by playing on the moral views of two different groups.

Anyhow, i hope that clarifies what i was getting at.

Eminem’s video for his new song Mosh brings me to tears. Regardless of what anyone things of Eminem, i’ve always loved his willingness to fight, to be resistant to contemporary society even while being framed as mainstream. This video, put out by the Guerrilla News Network shows the anger and frustration of poor and marginalized populations, upset with Bush for the way that he’s destroyed the fabric of this country. It is a call to action, urging people to get out and vote. It is a rhythmic composition of completely radical and political rhetoric. It is a call to action for youth and for the disenfranchised. I sure hope that the youth get out to vote this time. They need to stand up for themselves before they become yet another group abused by this regime.

Update: The lyrics are in the extended entry for those who want to know what is being said.

END_OF_DOCUMENT_TOKEN_TO_BE_REPLACED

When i moved to CA, i was startled by the absurd number of Propositions. So, as an excuse to see some friends that i haven’t seen as a while, i brought 25 people to my house tonight to discuss the ballot. Everyone had researched an issue so we took turns explaining the pros/cons of each Proposition, joking around, and drinking whenever Starchild’s name was invoked. It felt good to be more informed as a voter and to have the opportunity to share amongst friends. A further plus is that we spent a night in political discourse without any fights breaking out. Everyone was conscious to present both sides of the argument instead of demanding solidarity in voting.

I strongly encourage other Californians to gather their friends for an evening of discussing the different issues. It’s a great opportunity for socializing and engaging in civic responsibility. For those in SF, there’s a ballot party at Commonwealth tonite, the 27th – it will be an opportunity to learn the different sides.

Also, if you’re in California and you’re supposed to vote on an electronic machine, ask for a paper ballot in case of recall. They are required by law to let you vote on paper, but they won’t give you the choice. Check out this animation: Paper or Plastic.

I hate cleaning my room, but it is wonderfully clean for the first time in months. Why? Because i have a two mile long To-Do list that makes me shudder. Reading email is no longer a procrastination devices for me because it is full of stressful reminders of what i haven’t done. So, it is on the to-do list. Thankfully, in blog procrastination, i found an essay on Structured Procrastination, kindly validating my procrastinating tendencies. (Tx Caterina)

Integrated Regional Information Networks (IRIN) has a web special on violence against women and girls, looking particularly at Gender-based Violence in Conflict Zones, complete with a stunning documentary on the topic. Please watch this documentary… for me.

I’m still cranky that Microsquish squashed e-quill upon purchasing it (even if Matt went on to do a good thing). I loved that program, absolutely loved it. I used it for lots of different things, including turning in class assignments, commenting on sites, taking notes. I beta-tested that puppy like you wouldn’t believe because i truly thought it was a fantastic step forward. And then MS went and brutally murdered it, with no trace left behind but a sad website. 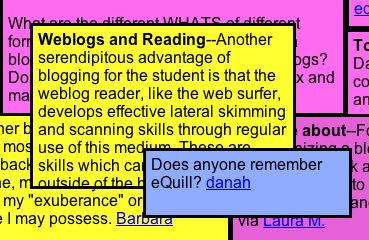 So, when Mary posted about this cross between a blog and a wiki, i was overjoyed. I know that one day e-quill will have to come back in some form… it really is the answer to comments and collective voices. It is digital graffiti and the opportunity to focus on the collection before the individual, offering a perspective of collective action instead of linear narratives. It makes every hypertext bone in my body quiver with excitement. Please, please bring back e-quill soon.

Update: ::gulp:: I didn’t realize that when i found Will’s page (pictured above), i was writing graffiti on someone’s page and starting it as a trend (tx Mary). I was just trying to point out a new tool. So, i explored further, made my own webnote so that readers can graffiti me.

Wired has a great article on the I Love Bees game. I’ve been peripherally following this since it started, and i’m quite excited about it. In short, I Love Bees is an interactive game played throughout the US, encouraging people to figure out a large storyline and follow clues online and offline at payphones. Absolutely fabulous.