I’ve changed my name twice. First, I took my (now ex) stepfather’s last name when I was a child. At 18, I started the process to take my maternal grandfather’s name to honor him and to create an identity that meant something to me. The process was finalized when I was 22. And let me tell you, it was a Pain in the F* Ass.

With this in mind, I nearly bowled over laughing when I read that Eric Schmidt told the Wall Street Journal that he thought that name changes would become more common place. The WSJ states:

“[Schmidt] predicts, apparently seriously, that every young person one day will be entitled automatically to change his or her name on reaching adulthood in order to disown youthful hijinks stored on their friends’ social media sites.”

This is ludicrous on many accounts. First, it completely contradicts historical legal trajectories where name changes have become increasingly more difficult. Second, it fails to account for the tensions between positive and negative reputation. Third, it would be so exceedingly ineffective as to be just outright absurd.

Changing one’s name didn’t used to be a big deal. Hell, if you stepped off a boat on Ellis Island and the folks there couldn’t understand your name, it would’ve been changed for you automatically. Children used to get name changes upon arriving in the US simply to make them fit in better. Today, changing your name is a bureaucratic nightmare (unless you’re getting married in some states). You have to inform the local paper of every place you’ve ever lived. Not just once but thrice. At least in Pennsylvania. You have to contact everyone you owe money to, including all credit bureaus. You have to go through loop after loop to prove that you’re not doing it to avoid creditors or escape legal restrictions. If you change your name outside of the institution of marriage, you are assumed to be a security threat. And boy is it annoying. This has only gotten more difficult over time – why would anyone think it’ll get easier?

That point aside, reputation is built up over time. It can be built up negatively and positively. But even when folks have a negative reputation, they often don’t want to lose the positive reputation that they’ve built. Starting at zero can be a lot harder than starting with a mixed record. Most people who have bruises on their public reputation also have gold stars. Just look at various infamous people who have had their names dragged through the mud by the press. Many have been invited to change their names but few have. Why? Because it’s more complicated than a simple name change.

To make matters worse, changing your name doesn’t let you avoid past names. All it takes is for someone whose motivated to make a link between the two and any attempt to walk away from your past vanishes in an instant. Search definitely makes a mess out of people’s name-based reputation but a name change doesn’t fix it if someone’s intent on connecting the two. (Personal humor… I thought when I created zephoria.org that I could separate my digital identity from my reputation as a scholar. My blog was supposed to be pseudonymous. Ooops.)

Don’t get me wrong – we’re in for a really confusing future as reputation gets complicated by digital self-presentations and the mouthing off of our friends. I’m not at all convinced that I know the answer but I do know that name changes aren’t going to solve anything.

The thing is… I’m really curious about this strange depiction of Schmidt’s attitude, especially given his previously strange comments on the end of privacy. How does he see privacy as dead while imagining a world in which reputation can be altered through a name change? Does anyone have any good insights into how he thinks about these issues because I’m mighty confused and I’d love to understand his mental model.

I hate fear-based approaches to education. I grew up on the “this is your brain on drugs” messages and watched classmates go from being afraid of drugs to trying marijuana to deciding that all of the messages about drugs were idiotic. (Crystal meth and marijuana shouldn’t be in the same category.) Much to my frustration, adults keep turning to fear to “educate” the kids with complete disregard to the unintended consequences of this approach. Sometimes, it’s even worse. I recently received an email from a friend of mine (Chloe Cockburn) discussing an issue brought before the ACLU. She gave me permission to share this with you:

A campus police officer has been offering programs about the dangers inherent in using the internet to middle and high school assemblies. As part of her presentation she displays pictures that students have posted on their Facebook pages. The idea is to demonstrate that anyone can have access to this information, so be careful. She gains access to the students’ Facebook pages by creating false profiles claiming to be a student at the school and asking to be “friended”, evidently in violation of Facebook policy.

An ACLU affiliate received a complaint from a student at a small rural high school. The entire assembly was shown a photo of her holding a beer. The picture was not on the complainant’s Facebook page, but on one belonging to a friend of hers, who allowed access to the bogus profile created by the police officer. The complainant was not “punished” as the plaintiff above was, but she was humiliated, and she is afraid that she will not get some local scholarship aid as a result.

So here we have a police officer intentionally violating Facebook’s policy and creating a deceptive profile to entrap teenagers and humiliate them to “teach them a lesson”??? Unethical acts + deception + fear + humiliation != education. This. Makes. Me. Want. To. Scream.

In my own work, I’ve found that teenagers care deeply about privacy in that they care about knowing how information flows and wanting influence over it. They care deeply about their reputation and leverage the tools available to help shape who they are. Of course, reputation and privacy always come back to audience. And audience is where we continuously misunderstand teenagers. They want to make sure that people they respect or admire think highly of them. But this doesn’t always mean that they care about how YOU think about them. So a teenager may be willing to sully their reputation as their parents see it if it gives them street cred that makes them cool amongst their peers. This is why reputation is so messy. There’s no universal reputation, no universal self-presentation. It’s always about audience.

The teenagers that I first started interviewing in 2004 are now young adults. Many are in college or in the army and their views on their reputation have matured. How they think about privacy and information flow has also matured. They’re thinking about a broader world. At the same time, they’re doing so having developed an understanding of these challenges through their engagement with social media. Are their ideas about these technologies perfect? Of course not. But they’re a whole lot more nuanced than those of most adults that I talk with.

Earlier today, Pew Research Center’s Internet and American Life Project released a report entitled “Reputation, Management, and Social Media” which includes a slew of data that might seem counter-intuitive to adults who have really skewed mythical views of youth and young adults. They found that young adults are more actively engaged in managing what they share online than older adults. In fact, 71% of the 18-29s interviewed in August-September of 2009 who use social network sites reported having changed their privacy settings (vs. 55% of those 50-64). Think about that. This was before Time Magazine put privacy on their front page.

Now, let’s be clear… Young adults are actively engaged in managing their reputation but they’re not always successful. The tools are confusing and companies continue to expose them without them understanding what’s happening. But the fact that they go out of their way to try to shape their information is important. It signals very clearly that young adults care deeply about information flow and reputation.

Reputation matters. This is why Pew found that 47% of 18-29s delete comments made by others on their profiles (vs. 29% of 30-49s and 26% of 50-64s). Likewise, 41% of them remove their name from photos (vs. 24% of 30-49s and 18% of 50-64s). While Pew didn’t collect data on those under 18, I’d expect that this age-wise trend would continue into that age bracket. Much of this is because of digital literacy – the younger folks understand the controls better than the older folks AND they understand the implications better. We spend a lot more time telling teenagers and young adults that there are consequences to reputation when information is put up online than we do listening to ourselves. This is also because, as always, youth are learning the hard way. As Pew notes, young adults have made mistakes that they regret. They’ve also seen their friends make mistakes that they regret. All of this leads to greater consciousness about these issues and a deeper level of engagement.

As always, this Pew report is filled to the brim with useful information that gives us a sense of what’s going on. Here are some of my favorite bullet points:

This Pew report does more than inform us about privacy and reputation issues. Its data sends an important message: We need more literacy about these issues. Ironically, I think that the best thing that’s going to come about because of Facebook’s ongoing screw-ups is an increased awareness of privacy issues. When youth see that they can do one of two things with their interests: delete them or make them publicly visible to everyone, they’re going to think twice. Sure, many will still make a lot of that content publicly accessible. And others will be very angry at Facebook for not giving them a meaningful choice. 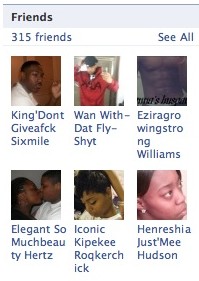 But this is going to force people to think about these issues. And the more people think about it, the more they actively try to control what’s going on. (Of course, we need Facebook to stop taking controls away from people, but that’s a different story.)

Pew’s report also counters a lot of myths that I’ve been hearing. For example, the desire for anonymity isn’t dead. Facebook tends to proudly announce that its users are completely honest about their names. Guess what? Many youth don’t trust Facebook. And they’re not providing them with real names either. Just take a look at this screen shot that I grabbed from a publicly accessible Facebook profile. This image isn’t doctored and while some of the names reflect real ones, there’s a lot of obscuring going on.

If you care about youth, if you care about issues of privacy and reputation, PLEASE read the Pew report. It is an example of brilliant research and tremendous reporting.