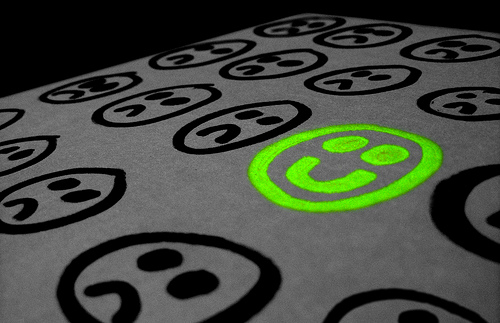 Carmen and her mother are close. As far as Carmen’s concerned, she has nothing to hide from her mother so she’s happy to have her mom as her ‘friend’ on Facebook. Of course, Carmen’s mom doesn’t always understand the social protocols on Facebook and Carmen sometimes gets frustrated. She hates that her mom comments on nearly every post, because it “scares everyone away…Everyone kind of disappears after the mom post…It’s just uncool having your mom all over your wall. That’s just lame.” Still, she knows that her mom means well and she sometimes uses this pattern to her advantage. While Carmen welcomes her mother’s presence, she also knows her mother overreacts. In order to avoid a freak out, Carmen will avoid posting things that have a high likelihood of mother misinterpretation. This can make communication tricky at times and Carmen must work to write in ways that are interpreted differently by different people.

When Carmen broke up with her boyfriend, she “wasn’t in the happiest state.” The breakup happened while she was on a school trip and her mother was already nervous. Initially, Carmen was going to mark the breakup with lyrics from a song that she had been listening to, but then she realized that the lyrics were quite depressing and worried that if her mom read them, she’d “have a heart attack and think that something is wrong.” She decided not to post the lyrics. Instead, she posted lyrics from Monty Python’s “Always Look on the Bright Side of Life.” This strategy was effective. Her mother wrote her a note saying that she seemed happy which made her laugh. But her closest friends knew that this song appears in the movie when the characters are about to be killed. They reached out to her immediately to see how she was really feeling.

Carmen is engaging in social steganography. She’s hiding information in plain sight, creating a message that can be read in one way by those who aren’t in the know and read differently by those who are. She’s communicating to different audiences simultaneously, relying on specific cultural awareness to provide the right interpretive lens. While she’s focused primarily on separating her mother from her friends, her message is also meaningless to broader audiences who have no idea that she had just broken up with her boyfriend. As far as they’re concerned, Carmen just posted an interesting lyric.

Social steganography is one privacy tactic teens take when engaging in semi-public forums like Facebook. While adults have worked diligently to exclude people through privacy settings, many teenagers have been unable to exclude certain classes of adults – namely their parents – for quite some time. For this reason, they’ve had to develop new techniques to speak to their friends fully aware that their parents are overhearing. Social steganography is one of the most common techniques that teens employ. They do this because they care about privacy, they care about misinterpretation, they care about segmented communications strategies. And they know that technical tools for restricting access don’t trump parental demands to gain access. So they find new ways of getting around limitations. And, in doing so, reconstruct age-old practices.

Steganography is an ancient technique where people hide messages in plain sight. Invisible ink, tattoos under hair on messengers, and messages embedded in pictures are just a few ways in which steganography is employed. Cryptographers are obsessed with steganography, in part because it’s hardest to decode a message when you don’t know where to look. This is precisely why spy movies LOVE steganography. Of course, average people have also employed techniques of hiding in plain sight for a long time, hiding information in everyday communication, knowing that it’ll only be interpreted by some. Children love employing codes and adults generally pretend as though they can’t understand pig Latin or uncover the messages that children hide using invisible ink pens purchased from toy stores. Yet, as children grow up, they get more mature about their messaging, realizing that language has multiple layers and, with it, multiple meanings. They often learn this by being misinterpreted.

What fascinates me is that teens are taking these strategies into the digital spaces, recognizing multiple audiences and the challenges of persistence, and working to speak in layers. They are not always successful. And things that are meant to mean one thing are often misinterpreted in all sorts of the wrong ways. But that doesn’t mean teens aren’t experimenting and learning. In fact, I’d expect that they’re learning more nuanced ways of managing privacy than any of us adults. Why? Because they have to. The more they live in public, the more I expect them to hide in plain sight.

(This work is licensed under a Creative Commons Attribution 3.0 Unported License.)

50 thoughts on “Social Steganography: Learning to Hide in Plain Sight”