Although I’ve always been eh about most scifi, I’ve grown increasingly fond of young adult science fiction and scifi focused on teens. There’s something fun in reading about teens running around trying to save the world. I can thank/blame Cory Doctorow for most of this because he’s the one who got me hooked on reading it. So I’m super super super stoked to announce that his first young adult scifi book is on the shelves.

Little Brother is the story of a group of friends who are in the middle of an alternate reality game when a terrorist attack shakes San Francisco. They are whisked off by homeland security as potential terrorists; after a horrible few days, three of the four are released. And thus begins the tale of a group of teens who declare war on DHS. Beneath the fun YA story is a critique of the war on terrorism and a how-to guide that teaches teens how to be culture and tech hackers and jammers. It’s really geekalicious. I was fortunate enough to read the manuscript, but I’ve just ordered the book so that I can reread it. I really recommend checking it out – it’s quite fun and entertaining. 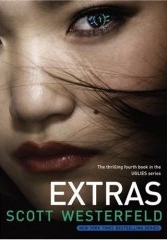 I also have to give Cory kudos for introducing me to my favorite new teen book series – Uglies, Pretties, Specials, and Extras by Scott Westerfeld. Westerfeld’s series does the most awesomest job at breaking down contemporary society’s ideas of beauty, status, and reputation. In Tally Youngblood’s world, everything is about finally turning 16 and being allowed to become “pretty” through plastic surgery that makes you look as cool as everyone else who is 16. Being an ugly teenager sucks; being a pretty means getting access to everything and having all of the fun. Only, perhaps there might be a cost to being pretty?

While the first three focus on pushing against society’s valuation of the beautiful, the fourth introduces a new and “improved” world… where everyone in society is ranked based on how often people talk about them and “kickers” (aka bloggers) are obsessed with getting to the top. Needless to say, attention/reputation-based economies don’t come out the way that we might imagine them to be. (Translation: this series deconstructs both of our most “valuable” economies today – the economy of the beautiful AND the purportedly merit-based attention/reputation-economy. Sooooo good! And such fun world-saving kickass girl characters!)

For those of you who aren’t familiar with young adult sci fi, think of it as energizing brain candy. You can finish most YA books on a cross-country flight and they are far far far better than the movies that they show. And besides, they leave you with a youthful grin on your face.