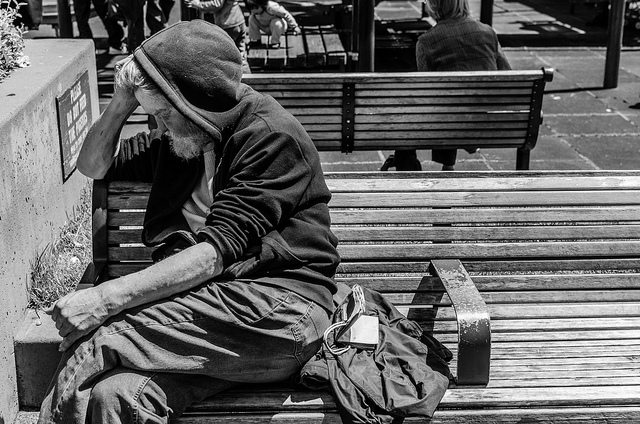 In 2003, I was living in San Francisco and working at a startup when I overheard a colleague of mine — a self-identified libertarian — spout off about “the homeless problem.” I don’t remember exactly what he said, but I’m sure it fit into a well-trodden frame about no-good lazy leeches. I marched right over to him and asked if he’d ever talked to someone who was homeless. He looked at me with shock and his cheeks flushed, so I said, “Let’s go!” Unwilling to admit discomfort, he followed.

>We drove down to 6th Street, and I nodded to a group of men sitting on the sidewalk and told him to ask them about their lives. Then I watched as he nervously approached one guy and stumbled through a conversation. I was pleasantly surprised that he ended up talking for longer than I expected before coming back to me.

I let him trail off as we got back into the car and drove back to the office in silence.

San Francisco is in the middle of a class war. It’s not the first or last city to have heart-wrenching inequality tear at its fabric, challenge its values, test its support structures. But what’s jaw-dropping to me is how openly, defensively, and critically technology folks demean those who are struggling. The tech industry has a sickening obsession with meritocracy. Far too many geeks and entrepreneurs worship at the altar of zeros and ones, believing that outputs can be boiled down to a simple equation based on inputs. In a modern-day version of the Protestant ethic, there’s a sense that success is a guaranteed outcome of hard work, skills, and intelligence. Thus, anyone who is struggling can be blamed for their own circumstances.

This attitude is front and center when it comes to people who are visibly homeless on the streets of San Francisco, a mere fraction of the total homeless population in that city.

I wish that more people working in the tech sector would take a moment to talk to these men and women. Listening to their stories is humbling. Vets who fought for our country, under the banner of “freedom,” only to be cognitively imprisoned by addiction and mental illness. Abused runaways trying to find someone who will treat them with respect. People who were working hard and getting by until an accident struck and they lost their job and ended up in medical debt. Immigrants who came looking for the American Dream only to find themselves trapped. These aren’t no-good lazy leeches. They’re people. People whose lives have been a hell of a lot harder than most of us can even fathom. People who struggle on a daily basis to find food and shelter. People who we’ve systematically disenfranchised and failed to support. People who the bulk of tech workers ignore, shun, resent, and demonize.

A city without a safety net cannot be a healthy society. And nothing exacerbates this worse than condescension, resentment, and dismissal. We can talk about the tech buses and the lack of affordable housing, but it all starts with appreciating those who are struggling. Only a mere fraction of San Francisco’s homeless population are visible, but those who are reveal the starkness of what’s unfolding. And, as with many things, there’s more of a desire to make the visible invisible than there is to grapple with dynamics of poverty, mental illness, addiction, abuse, and misfortune. Too many people think that they’re invincible.

If you’re living in the Bay Area and working in tech, take a moment to do what I asked my colleague to do a decade ago. Walk around the Tenderloin and talk with someone whose poverty is written on their body. Respectfully ask about their life. Where did they come from? How did they get here? Where do they want to go? Ask about their hopes and dreams, struggles and challenges. Get a sense for their story. Connect as people. Then think about what meritocracy in tech really means.

(This entry was first posted on May 13, 2014 at Medium under the title “San Francisco’s (In)Visible Class War” as part of The Message.)