(Newbie note: If you have never heard of 4chan, start with the Wikipedia entry and not the website itself. The site tends to offend many adults’ sensibilities. As one of my friends put it, loving LOLcats or rickrolling as outputs is like loving a tasty hamburger; visiting 4chan is like visiting the meat factory. At some point, it’d probably help to visit the meat factory, but that might make you go vegetarian.) 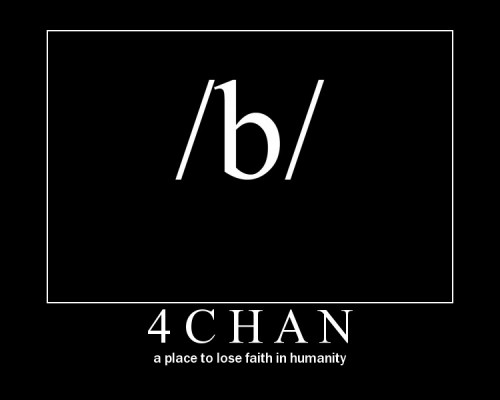 Over the last year, 4chan emerged from complete obscurity to being recognized by mainstream media as something of significance. Perhaps it was moot’s appearance at the top of the TIME 100 list. More likely, it was moot’s TED talk on anonymity that tipped it all over. At TED, moot – otherwise known as Chris Poole – revealed a more “legitimate” side of an underground site typically known to outsiders as the cesspool of the internet. And in doing so, he marked himself as one of the more articulate, thoughtful, and entertaining community leaders on the web. In short, he was someone that adults could embrace, even if his site scared the shit out of them.

Amidst all of this, 4chan has “popped.” Journalists and academics are clamoring to discuss and analyze 4chan. At first, it was all about discussing whether or not this community of 9.5 million mostly young mostly male internet people was evil or brilliant. Lately, the obsession focuses on anonymity, signaling that Chris’ TED talk set the frame for public discourse about 4chan. Both of these are certainly interesting topics. 4chan has created some of the most lovable memes on the internet but /b/tards have also been some of the most nefarious trolls and griefers on the web. And anonymity is a really complex topic that can’t be boiled down to a question of accountability in light of whether or not the anonymous commentator is seen as evil or brilliant. And while I could write a long essay on how the anonymity that people seek on the web counters the ways in which identifiability on the web far exceeds any identifiability that ever existed offline, that’s not the point of this post. Instead, what I want to claim is that 4chan is next-gen hacker culture. And that it should be appreciated (and vilified) on those terms.

I grew up in a community of hackers at the tale end of the security hacking days. Many of my friends in high school prided themselves on their phreaking skills or in their ability to break into high-end security systems. While some were truly gifted technical geniuses, few were true crackers bent on destroying systems with malicious intentions. Most of my friends simply wanted to see what they could do. And mostly, the hacking that was taking place was really mundane, leveraging people’s stupidity in using “admin/admin” as their username/password combo to leave little love notes and easter eggs. Of course, there were consequences. One of my friends was forbidden from using the internet throughout high school while another ended up doing time in the Navy’s security system in lieu of the alternatives. I was not connected to the 31337 hackers that were central to the security hacking era, but I grew up on the margins in ways that allowed me to appreciate their technical prowess (and to want to be Angelina Jolie a few years later).

Depending on where you sit, security hackers are vilified or adored, recognized for the havoc that they wreaked and for really challenging systems to be much more secure. As a community, they were the underground of the 80s and 90s. Yet, today, former hackers are some of the most powerful people in the tech industry. Some hackers had truly malicious intentions while others were engaged in a series of acts that can best be understood through a popular 4chan phrase: “for the lolz.” It was entertaining to see what one could do. And while most of those who were in it for the lolz had no political agenda, the resultant acts of the security hackers ended up being deeply political, ended up really shaping the development of technological systems.

I would argue that 4chan is ground zero of a new generation of hackers – those who are bent on hacking the attention economy. While the security hackers were attacking the security economy at the center of power and authority in the pre-web days, these attention hackers are highlighting how manipulatable information flows are. They are showing that Top 100 lists can be gamed and that entertaining content can reach mass popularity without having any commercial intentions (regardless of whether or not someone decided to commercialize it on the other side). Their antics force people to think about status and power and they encourage folks to laugh at anything that takes itself too seriously. The mindset is deeply familiar to me and it doesn’t surprise me when I learn that old hacker types get a warm fuzzy feeling thinking about 4chan even if trolls and griefers annoy the hell out of them. In a mediated environment where marketers are taking over, there’s something subversively entertaining about betting on the anarchist subculture. Cuz, really, at the end of the day, many old skool hackers weren’t entirely thrilled to realize that mainstreamification of net culture meant that mainstream culture would dominate net culture. For us geeks, freaks, and queers who embraced the internet as a savior, mainstreamification has meant a new form of disempowerment.

As with security hackers, the attention hackers that are popping up today are a mixed bag. It’s easy to love the cultural ethos and despise some of the individuals or the individual acts. In recognizing the cultural power of the community represented by 4chan, I don’t mean to justify some of the truly hateful things that some individuals have done. But I am willing to laugh off some of the stupidity and find humor in the antics while also rejecting certain acts. I’m willing to lament the fact that it’s been 20 years and underground hacking culture is still mostly white and mostly male while also being stoked to see a new underground subculture emerge. Of course, it doesn’t look like it’ll be underground for long… And I can’t say that I’m too thrilled for every mom and pop and average teen to know about 4chan (which is precisely why I haven’t blogged about it before). But I do think that there’s something important about those invested in hacking the attention economy. And I do hope that we always have people around us reminding us to never take the internets too seriously.

Update: Yes, I know the more commonly accepted spelling of lolz is lulz. (The full phrase should also be: “I did it for the lulz.”) I can’t explain why I prefer lolz but I always have and there are others out there who use this variant as well. Lulz highlights the negativity (since it’s loling at someone else’s expense) while lolz focus on generalized laughter, not always hurtful laughter. I prefer to think of things in this frame. YMMV.

(Translated into Russian by Mikhail Karpov)

21 thoughts on ““for the lolz”: 4chan is hacking the attention economy”