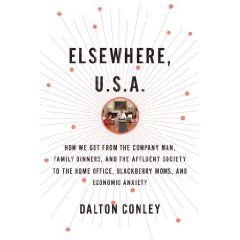 It is not that often that I find myself cheering “Yes! Yes!” as I read a book, but Dalton Conley’s “Elsewhere U.S.A.: How we got from the Company Man, Family Dinners, and the Affluent Society to the Home Office, Blackberry Moms, and Economic Anxiety” made me do precisely that. As a result, I feel the need to urge you to go and buy this book. He has captured an essence that we all know, but grounded it in a way that really helped me put two and two together at a time when we’re all trying to work out what the hell is happening to our society. He hits a nerve in a way that helps you see what’s right in front of you.

If you don’t know Dalton Conley, he’s a brilliant sociologist at NYU who is mostly known for his work on race (“whiteness” in particular). [If you’re a geek, you’re probably more familiar with his partner Natalie Jeremijenko.]

In Elsewhere, U.S.A, Conley starts by painting two portraits – one of Mr. and Mrs. 1959 and one of Mr. and Mrs. 2009. Using broad strokes, he highlights the differences in lifestyle between the educated, white collar families of those two different eras. From there, he weaves us through a discussion of changes in the economic, social, and corporate levels. Mixing enticingly delicious prose with sociological theory (conveyed in a unbelievably accessible manner), Conley starts mapping out changes that have taken place and how they’ve panned out.

For example, he explains why the upper classes have become so insecure and anxious about their jobs, resulting in the first point in history where the wealthier you are, the more you work. A good quote on that one: “This constant fear of being exposed, cut out, or outsourced, and thereby having one’s ‘capital’ rendered valueless, is the principal pathos of the era.” Conley investigates how two-income households have created new pressures, forcing families to work harder to keep up. He examines how technology has helped us work harder, more often, and everywhere instead of relieving burdens.

Moving from the tax code to the dinner party, he also looks at how “leisure” is being blurred with work in new ways and how people in the upper echelons invest in social activities in an effort to maintain status at work. This gets into a broader notion of networking and how being social is key to having high status. “Whereas in the industrial epoch, the ability to cloister oneself off from the hoi polloi was a mark of power; in the post-industrial, networked economy, being surrounded by as many people as possible, all seeking your attention, is the ultimate manifestation of rank.”

While the focus of the book is on the upper classes, Conley introduces the working class as a backdrop, noting how some of the upper class dynamics have altered working class culture. He examines the shift in power between the employee and the employer, using relations like the nanny and mother as a way of looking at how traditional structures of power and status maintenance have broken down. But he also looks directly at how the structure of poverty has changed. “Poverty in a post-industrial economy is less about the ability to meet basic material needs and more about the lack of control over life choices and the personalized humiliation that the poor experience in their work lives.”

Anyhow, “Elsewhere, U.S.A.” is chock full of good information that’ll make you think about the lifestyle we live and how it shapes and is shaped by modern society. Plus it is written in such a fun way that it’s hard to put it down. For many of those who read this blog, this book is a tremendous social critique of your (and my) lifestyle. I cannot recommend this book enough. (I especially recommend reading it while on a plane or otherwise living the “elsewhere” lifestyle… then it’ll really hit a nerve.)

Note: Neither Conley nor his publisher or agent or anyone else asked me to do this review or know that I’m doing it. I wrote this post purely because I think that this book is a MUST READ.