I’ve been doing a lot of thinking about HCI (human-computer interaction) and my relationship to that field. I’ve been kinda frustrated with HCI. The name HCI implies that the field is about people’s relationship with machines and the interaction paradigms and designs that enable more efficient or enjoyable connections between the two. Many argue that this is the crux of my research. I’ve been resistant to this because I believe that I study human-human interaction that happens to have a mediated component to it. 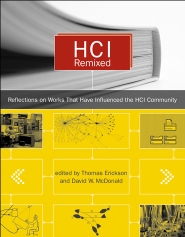 This week, a new book appeared in my mailbox: HCI Remixed: Reflections on Works That Have Influenced the HCI Community (eds. Thomas Erickson and David McDonald). This book helped remind me that human-human interaction was part of HCI, even if the field seems not to emphasize that these days.

This book gave me all sorts of smiles. First, I’m a sucker for books of essays where I know half of the authors and drool with respect over the other half. Second, I love books that trace histories that I read long ago while offering fresh perspective and new contextualization. Third, I like books that challenge me to rethink my position on something. Through the perspective of contemporary HCI scholars, this book examines some of the core literature that is at the foundation of HCI and reflects on its relevance today. In walking down this memory lane, I was reminded of the many facets of HCI. There’s the HCI that’s about interfaces. There’s the HCI that’s about development processes, foundational to contemporary industry practice. There’s the HCI that’s about taking computation into the wild while also making it ubiquitous or invisible. There’s the HCI that’s about supporting collaboration and groups. All of these HCIs are in the history of HCI and it’s fun to read these eminent and emergent scholars reflect on the work done in all of these areas. This book made me long for the days when I felt like HCI was my home because it highlights a history that is still relevant to me. (Of course, some of what they discuss – Everett Rogers and Jane Jacobs, for example – goes beyond HCI.)

While this book has unbelievable breadth, my frustration with contemporary HCI often stems from my feeling that it has narrowed its focus over the years. While experimental psychology has been fully embraced by the field, many HCI scholars reject qualitative social science as irrelevant to HCI. There are plenty who embrace it, but the experimental psych approach dominates the conversations and work that does not follow the normative formula tends to not get published. Personally, I’m wary of most publications that make broad claims based on user studies with n=6 CS grad students. (While there are sound reasons for this methodology in certain subfields of psych, most of how it gets executed in HCI scholarship makes my toes curl.) As HCI tries to become a field in its own right, I feel increasingly alienated by it. I stopped going to CHI a few years ago because it no longer felt like my home (and the cost was way prohibitive). I stopped reviewing this year because I felt as though my criticisms were with the methodological approach of the field and thus I was doing a disservice to CHI.

Yet, HCI and its sister CSCW really were the beginnings of thinking about how people communicate in computer-mediated environments and it’s nice to see that history recounted. It’s nice to be reminded that qualitative work really was valued. Much of that seems to have been forgotten in an era of scholarship that requires user tests and design implications to be considered valid. What happened to work that focused on the interaction between humans and computers in the wild? Personally, I love work that analyzes how mega collective action by inhabitants of a system result in behaviors never predicted by the designers. This, unfortunately, doesn’t fit neatly into the build/test/explain cycle that dominates the field; thus, it tends to get published elsewhere. I hear things are changing and HCI is evolving in new ways, especially now that iSchools are starting to engage with the topic. Perhaps this book will remind more folks where HCI came from and open new doors for where it might go.