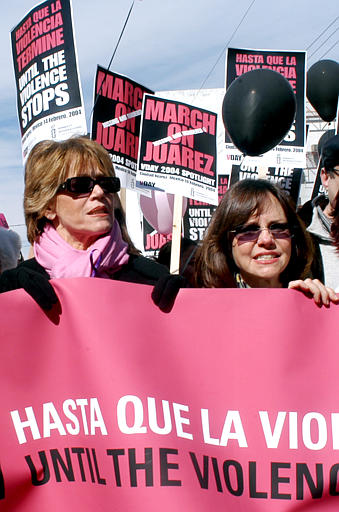 I don’t think that i can describe the various emotions that i feel returning from Juarez. But i want to try to record what i can, more for my own processing… but also for those who’ve IMed me to know.

It was surreal. Two days surrounded by famous people, paparazzi wanting to see them, and the mothers of victims. What a triangulation of emotions. The hope of the privileged, the desire and surfaceness of the paparazzi and the mind-numbing sorrow and anguish of the mothers. As i escorted one of the mothers to the stage, i took her hand, i looked into her eyes. A wave of nausea hit me. Her eyes were dark, lifeless, staring out in complete shock and horror. How do you explain to a woman who lost her 17 year old baby that her participation was so valuable, so appreciated? You can’t. But i didn’t have to. A few ours later, she came out on stage to give a speech. At the end, a hideous heart-wrenching, blood-curling scream came out of her. “Ni una mas.” (Not one more) We all coiled back, struck by the terror of that sound. And then we collapsed, in anger and sorrow, remembering why we were there…

Perhaps i should back up….

Scott and i connected at the airport. I had spent the last n days with my geek community and was trying to find grounding in what i was about to do. I went to the bathroom to get a breath of fresh air. I found a woman in there talking about Juarez. Sure enough, she was headed over. I smiled, knowing that there would be many of us.

I walked out, trying to figure out how to cross the border. The woman from the bathroom spoke Spanish and arranged a taxi for us. In the meantime, i saw a huddle of pink and red… V-Day. I approached them, oblivious to who it might be and asked if they were going over to Lucerna. Abruptly, a brisk man came up and said yes. By that point, i realized that i had just walked in on Carole Black (the head of Lifetime) and her crew. Later, i was to learn that the brisk man was the head of security for all of the stars. He was amazing, totally involved in the movement, had been following it for years, made a movie and a music video about the Juarez murders… later, he would tell me all of the details about what he had found.

We got pulled into a car with the brisk man’s sister and whisked off to Juarez. Landed right into the headquarters of chaos, as folks worked to organize what was going on. Dropped off our stuff and headed out with everyone to the consulate. It was an opportunity to talk to who all had come. 2 US Congresswomen, the US diplomats in Juarez, Jane Fonda, and others. Here, Jane gave a moving speech about why she was in Juarez:

She continued on to talk about privilege and why it was necessary to recognize privilege, to use privilege to help others. It was a perfect opportunity for reflection and many of us took it.

The next day began with a lecture and a press conference. Hundreds of local women showed up. By the time we reached the march, we were met with thousands more. We met at the bridge to El Paso. From the distance, we watched as thousands poured over the bridge, with banners and posters. I couldn’t see the end of them when i pulled back to join the rest of the V-Day crowd. Those of us who worked with V-Day were pulled in to help make a human barricade around the stars – the Congresswomen, Jane Fonda, Sally Fields, Holly Near, Christine Lahti, 3 Mexican actresses (Laura Flores, Marintia Escobedo, Lilia Aragon), Esther Chavez, Eve Ensler, et. al. We surrounded the “Very Important Vaginas” and the security guards surrounded us.

I thought it was all fun and games, mostly keeping the press at bay, until a man from the crowd rushed us. He was masked, armed with a spray paint can and looking rabid, screaming. People everywhere were screaming, being pushed aside as he rushed us. We split apart. i was with a group that grabbed Sally and 2 of the Mexican actresses and pulled them off to the side, huddling around them. A security guard stood with his back to us, facing the oncomer. Thankfully, the police tackled him before he reached us. From that point on, we were all on nerves.

There were people protesting us, protesting our presence. I spoke at length to Marintia Escobedo and she told me that many in Juarez thought what we were doing was foolish because only prostitutes and other undesirables were killed. Life was not equal; some people were worth more than others. Proper women weren’t killed. I was nauseous.

There was another round of speeches, and keys and whatnot, but everyone was on edge and we needed to get to the theatre so we made a human barricade again and ushered everyone to cars and rushed to the theatre.

At the theatre, we ran around, getting people food, organizing chaos. Everyone from the protest lined up to see the production of The Vagina Monologues, done in English and Spanish. It was there that i escorted the various mothers, saw their faces, was haunted by their sorrow. The show went on and it was magnificent, full of so much raw emotion. I was amazed watching the Mexican actresses. I could not understand their words, but their body language and emotive nature was so expressive that i knew exactly what was happening. Sally read a new piece… “The Memory of Her Face.” It was heart-wrenching, pulling together the stories of the acid burns in Pakistan with the bomb burnings in Iraq with the torture of the women in Juarez.

I spoke at length with the people from the consulate. They explained the political structure of Juarez and Mexico in general. The mayor of Mexico was of a different political party than those in the federal government. He had no interest in listening to them. They wanted answers; he refused to investigate. The US FBI wanted information; he refused to help. Elections are on July 4 and everyone is hoping for a more sympathetic mayor. Mayors are elected for one 6 year term. An attempt to assassinate this mayor was made in his first year; they shot a bullet through his brain; he is still the mayor.

Hypotheses were made as to what was going on. The various groups investigating it, both from the consulate and from other groups, told me that they believe that there is one serial killer who kills about 2 per year. They suspect that he is from the States and crosses twice to kill. The FBI believe this as well and have been trying to investigate; the Jaurez police will not help. Everything else is copycat crimes, trafficking in humans, or human parts. These women show up with parts missing. The serial killer never leaves nipples.

I went back to my hotel and realized i was out of cigarettes. I went to the front desk, asking where i could go get some. The guy got wide eyed. You can’t go out there. It’s dark and you’re a woman. Tell the bellman what you want and he will go out for you. My heart sunk. He was right, but it was so painful to be helpless.

The media were so happy to have us here. Apparently, the story has been covered many times over the years, but there is nothing new to report on… this is frustrating. Thus, it has died as a conversation. By being there, we gave them an opportunity to cover it again. There was so much media, so many interested groups.

The pressure is on. A special investigator was appointed by the federal government to investigate, no matter what. She was there with us. Amnesty International was there. Code Pink was there. So many amazing groups with amazing stories were there.

photo credit and caption: Actresses Jane Fonda and Sally Field, right, join hundreds of demonstrators who marched across the U.S.-Mexico border, Saturday, Feb. 14, 2004, in the city of Juarez, Chihuahua state, Mexico, to demand that authorities resolve the deaths of women and girls whose remains have often been found discarded in the desert Juarez, just across the Rio Grande from El Paso, Texas. (AP Photo/Marco Ugarte) [And yes, that’s my fuzzy hat off to the left.

2 thoughts on “Ni una mas! Not one more in Juarez!”