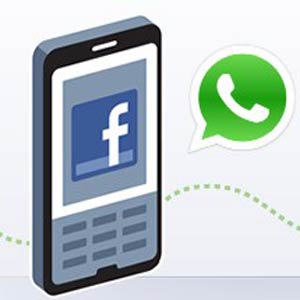 Unless you were off the internet yesterday, it’s old news that WhatsApp was purchased by Facebook for a gobsmacking $16B + $3B in employee payouts. And the founder got a board seat. I’ve been mulling over this since the news came out and I can’t get past my initial reaction: WTF?

Messaging apps are *huge* and there’s little doubt that WhatsApp is the premier player in this scene. Other services – GroupMe, Kik, WeChat, Line, Viber – still have huge user numbers, but nothing like WhatsApp (although some of them have even more sophisticated use cases). 450M users and growing is no joke. And I have no doubt that WhatsApp will continue on its meteoric rise, although, as Facebook knows all too well, there are only so many people on the planet and only so many of them have technology in their pockets (even if it’s a larger number than those who have bulky sized computers).

Unlike other social media genres, messaging apps emerged in response to the pure stupidity and selfishness of another genre: carrier-driven SMS. These messaging apps solve four very real problems:

So props to companies building messaging apps for seeing an opportunity to route around carrier stupidity.

I also get why Facebook would want to buy WhatsApp. They want to be the company through which consumers send all social messages, all images, all chats, etc. They want to be the central social graph. And they’ve never managed to get people as passionate about communicating through their phone app as other apps, particularly in the US. So good on them for buying Instagram and allowing its trajectory to continue skyrocketing. That acquisition made sense to me, even if the price was high, because the investment in a photo sharing app based on a stream and a social graph and mechanism for getting feedback is huge. People don’t want to lose those comments, likes, and photos.

But I must be stupid because I just can’t add up the numbers to understand the valuation of WhatsApp. The personal investment in the app isn’t nearly as high. The photos get downloaded to your phone, the historical chats don’t necessarily need to stick around (and disappear entirely if a child accidentally hard resets your phone as I learned last week). The monitization play of $.99/year after the first year is a good thing and not too onerous for most users (although I’d be curious what kind of app switching happens then for the younger set or folks from more impoverished regions). But that doesn’t add up to $19B + a board seat. I don’t see how advertising would work without driving out users to a different service. Sure, there are some e-commerce plays that would be interesting and that other services have been experimenting with. But is that enough? Or is the plan to make a play that guarantees that no VC will invest in any competitors so that all of those companies wither and die while WhatsApp sits by patiently and then makes a move when it’s clearly the only one left standing? And if that’s the play, then what about the carriers? When will they wake up and think for 5 seconds about how their greed is eroding one of their cash cows?

What am I missing? There has to be more to this play than I’m seeing. Or is Facebook just that desperate?