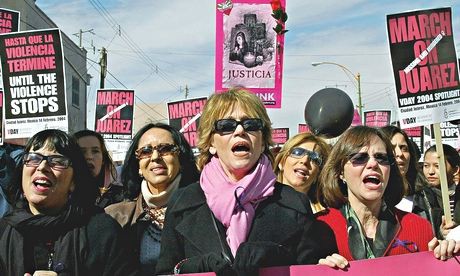 We were in Juarez Mexico. We had gone there as a group of activists to stage a protest over the government’s refusal to investigate the disappearance and brutal murders of hundreds of women. It was a V-Day initiative and so there were celebrities among us.

I was assigned as one of the faux fans and my responsibility was to hover around the celebrities during the protest in order to minimize who could actually access the celebrities. The actual bodyguards kept a distance so that the celebrities could be seen and heard. And photographed. It was a weird role, a moment in which it was made clear how difficult it was for celebrities to be in public. Their accessibility was always mediated, planned for, negotiated. And I was to be invisible so that they could be visible.

Over the years, I’ve worked with a lot of celebrities through my activist work. I’ve had to create artificial distractions, distribute fake information about celebrities’ locations, and help celebrities hide. I’ve had to help architect a process for celebrities to use the bathroom or get a glass of water and I’ve watched the cost of that overhead. Every move has to be managed because of paparazzi and fans. There’s nothing elegant about being famous when you just need to take a shit.

There’s a cost to fame, a cost that is largely invisible to most people. Many of the teens that I interviewed wanted to be famous. They saw fame as freedom — freedom from parents, poverty, and insecurity.

What I learned in working with celebrities is that fame is a trap, a burden, a manacle.

It seems so appealing and, for some, it can be an amazing tool. But for many who aren’t prepared for it, fame is a restricting force, limiting your freedom and mobility, and forcing you to put process around every act you take. Forcing you to live with constant critique, with every move and action constantly judged by others who feel as though they have the right because the famous are seen as privileged. There’s a reason that substance abuse runs rampant among celebrities. There’s a reason so many celebrities crack under pressure. Fame is the opposite of freedom.

Social media has created new platforms for people to achieve fame. Instagram fame. YouTube fame. But most people who become Internet famous aren’t Justin Bieber. They’re people with millions of followers and no support structure. They don’t have a personal assistant and bodyguard. They don’t have someone who manages the millions of messages they receive or turns away the creepy fans who show up in person. They are on their own to handle all of the shit that comes their way.

In her brilliant book, “Status Update: Celebrity, Publicity, and Branding in the Social Media Age,” Alice Marwick highlights how attracting attention and achieving fame is a central part of being successful in the new economy. Welcome to our neoliberal society. Yet, as Marwick quickly uncovers in her analysis, these practices are experienced differently depending on race and gender. What it means to be famous online looks different if you’re a woman and/or a person of color. The quantity and quality of remarks you receive as you attract attention changes dramatically. The rape threats increase. The remarks on your body increase. And the interactions get creepier. And the costs skyrocket.

I’m relatively well-known on the internet. And each time that I’ve written or done something that’s attracted a lot of attention, I’ve felt a hint of the cost of fame, so much so that I purposefully go out of my way to disappear for a while and decrease my visibility. Throughout my career, there have been times in which I could’ve done things that would’ve taken my micro-celebrity to the next level, and yet I’ve chosen to back away because I don’t like the costs that I face. I don’t like the death threats. I also don’t like when people won’t be honest with me. I don’t like when people get nervous around me. And I don’t like being objectified, as though I have no feelings. These are all part of the cost of fame. We don’t see celebrities as people; we see them as cultural artifacts.

We’ve made fame a desirable commodity, produced and fetishized. From reality TV and Jerry Springer to YouTube and Instagram, we’ve created structures for everyday people to achieve mass attention. But we’ve never created the structures to help them cope. Or for those who help propel others into fame to think about the consequences of their actions. And we’ve never stopped to think about how these platforms that fuel fame culture help reinforce misogyny and racism.

There’s a cost to fame, a cost that is unevenly borne. And I have no idea how to make that cost visible to the teens who desire fame, the media producers who create the platforms for fame, or the fans who generate the ugliness behind fame. It’s far too easy to see the gloss, far too difficult to see what it means to be trapped.

trapped in my glasshouse
crowd has been gathering since dawn
i make a pot of coffee
while catastrophe awaits me out on the lawn
i think i’m going to stay in today
pretend like i don’t know what’s going on
Ani Difranco, Glass House

In Juarez, we got attacked. In the mayhem, Jane Fonda’s jewelry was taken from her. I still remember the elegance with which she handled that situation. I also remember her response when someone asked if the jewerly was valuable. “Do you think I’m an idiot? This isn’t my first protest.” As we spent the night camped out under the flickering blue lights in the roach motel, I listened to her tell stories of previous political actions and the attacks she’d faced. She was acutely aware of the costs of fame, but she was also aware of how she could use it to make a difference. I couldn’t help but think of a comment Angelina Jolie once made when she noted that people would always follow her around with a camera so she might as well go to places that needed to be photographed. Neither women made me want to be famous, but both made me deeply appreciate those who have learned to negotiate fame.

This post was originally published to The Message at Medium on April 21, 2015 as part of Fame Week.