(Joan Donovan and I wrote the following op-ed for The Guardian.)

George Lincoln Rockwell, the head of the American Nazi party, had a simple media strategy in the 1960s. He wrote in his autobiography: “Only by forcing the Jews to spread our message with their facilities could we have any hope of success in counteracting their left-wing, racemixing propaganda!”

Campus by campus, from Harvard to Brown to Columbia, he would use the violence of his ideas and brawn of his followers to become headline news. To compel media coverage, Rockwell needed: “(1) A smashing, dramatic approach which could not be ignored, without exposing the most blatant press censorship, and (2) a super-tough, hard-core of young fighting men to enable such a dramatic presentation to the public.” He understood what other groups competing for media attention knew too well: a movement could only be successful if the media amplified their message.

Contemporary Jewish community groups challenged journalists to consider not covering white supremacists’ ideas. They called this strategy “quarantine”, and it involved working with community organizations to minimize public confrontations and provide local journalists with enough context to understand why the American Nazi party was not newsworthy.

When ‘hipster fascists’ start appearing in the media, something has gone very wrong

In regions where quarantine was deployed successfully, violence remained minimal and Rockwell was unable to recruit new party members. The press in those areas was aware that amplification served the agenda of the American Nazi party, so informed journalists employed strategic silence to reduce public harm.

The Media Manipulation research initiative at the Data & Society institute is concerned precisely with the legacy of this battle in discourse and the way that modern extremists undermine journalists and set media agendas. Media has always had the ability to publish or amplify particular voices, perspectives and incidents. In choosing stories and voices they will or will not prioritize, editors weigh the benefits and costs of coverage against potential social consequences. In doing so, they help create broader societal values. We call this willingness to avoid amplifying extremist messages “strategic silence”.

Editors used to engage in strategic silence – set agendas, omit extremist ideas and manage voices – without knowing they were doing so. Yet the online context has enhanced extremists’ abilities to create controversies, prompting newsrooms to justify covering their spectacles. Because competition for audience is increasingly fierce and financially consequential, longstanding newsroom norms have come undone. We believe that journalists do not rebuild reputation through a race to the bottom. Rather, we think that it’s imperative that newsrooms actively take the high ground and re-embrace strategic silence in order to defy extremists’ platforms for spreading hate.

Strategic silence is not a new idea. The Ku Klux Klan of the 1920s considered media coverage their most effective recruitment tactic and accordingly cultivated friendly journalists. According to Felix Harcourt, thousands of readers joined the KKK after the New York World ran a three-week chronicle of the group in 1921. Catholic, Jewish and black presses of the 1920s consciously differed from Protestant-owned mainstream papers in their coverage of the Klan, conspicuously avoiding giving the group unnecessary attention. The black press called this use of editorial discretion in the public interest “dignified silence”, and limited their reporting to KKK follies, such as canceled parades, rejected donations and resignations. Some mainstream journalists also grew suspicious of the KKK’s attempts to bait them with camera-ready spectacles. Eventually coverage declined.

The KKK was so intent on getting the coverage they sought that they threatened violence and white boycotts of advertisers. Knowing they could bait coverage with violence, white vigilante groups of the 1960s staged cross burnings and engaged in high-profile murders and church bombings. Civil rights protesters countered white violence with black stillness, especially during lunch counter sit-ins. Journalists and editors had to make moral choices of which voices to privilege, and they chose those of peace and justice, championing stories of black resilience and shutting out white extremism. This was strategic silence in action, and it saved lives. 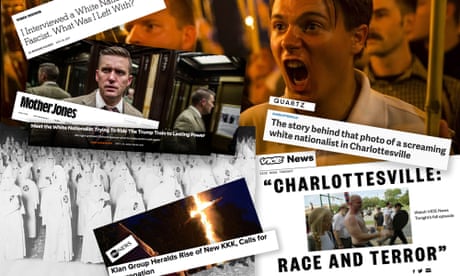 How should the media cover America’s racist extremists?

The emphasis of strategic silence must be placed on the strategic over the silencing. Every story requires a choice and the recent turn toward providing equal coverage to dangerous, antisocial opinions requires acknowledging the suffering that such reporting causes. Even attempts to cover extremism critically can result in the media disseminating the methods that hate groups aim to spread, such as when Virginia’s Westmoreland News reproduced in full a local KKK recruitment flier on its front page. Media outlets who cannot argue that their reporting benefits the goal of a just and ethical society must opt for silence.

Newsrooms must understand that even with the best of intentions, they can find themselves being used by extremists. By contrast, they must also understand they have the power to defy the goals of hate groups by optimizing for core American values of equality, respect and civil discourse. All Americans have the right to speak their minds, but not every person deserves to have their opinions amplified, particularly when their goals are to sow violence, hatred and chaos.

If telling stories didn’t change lives, journalists would never have started in their careers. We know that words matter and that coverage makes a difference. In this era of increasing violence and extremism, we appeal to editors to choose strategic silence over publishing stories that fuel the radicalization of their readers.

(Visit the original version at The Guardian to read the comments and help support their organization, as a sign of appreciation for their willingness to publish our work.)