As everyone knows, Kenya has been in a state of unrest since the corrupt elections in December. Interestingly, a surge of homebrewed cyberactivism has emerged to aid in information flow and resource sharing (as well as political organizing). As an example, take a look at Afromusing’s Twitter stream which contains regular updates from Kenya.

Much of what is going on in Kenya centers around the mobile phone. In Kenya, the mobile is used for everything from communication to financial transactions. More and more of Kenyan society has relied on the phone as a critical part of everyday life. Unfortunately, this has all been disrupted since the election. 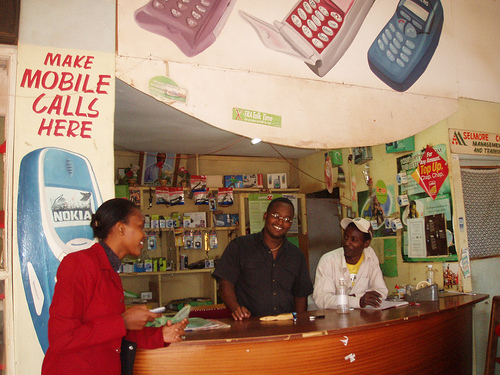 Kenyan phone users do not have monthly phone plans; they pay for prepaid credits (like most of the world). Prior to the election, getting credits was easy – they were available in kiosks, stores, bars, anywhere you could imagine. Yet, these venues all closed shop after the election because of the violence and looting. Credits have become a rare commodity and the price has skyrocketed. Credits have also turned into a currency and people are trading credits for food and medicine. Credits are worth more than the government’s currency. Because of difficulties in getting credits to citizens, a service called Pyramid of Peace has popped up to help people send credits to Kenyans.

Part of why people are so shocked about what is going on in Kenya right now is because Kenya was so stable. (I can’t help but wonder what would’ve happened if Gore supporters would’ve taken to the streets after my country’s corrupt election rather than be so complacent.) When people think about what is necessary when everything goes haywire, they normally talk about food, water, shelter, medicine. What does it mean that telephony has become a central player in people’s lives? What does it mean that access to communication technology is necessary for access to food, water, medicine?

Perhaps it would do all of us some good to consider what it would mean if mobile telephony suddenly became a rare commodity.

7 thoughts on “mobile phone credits as currency in Kenya”